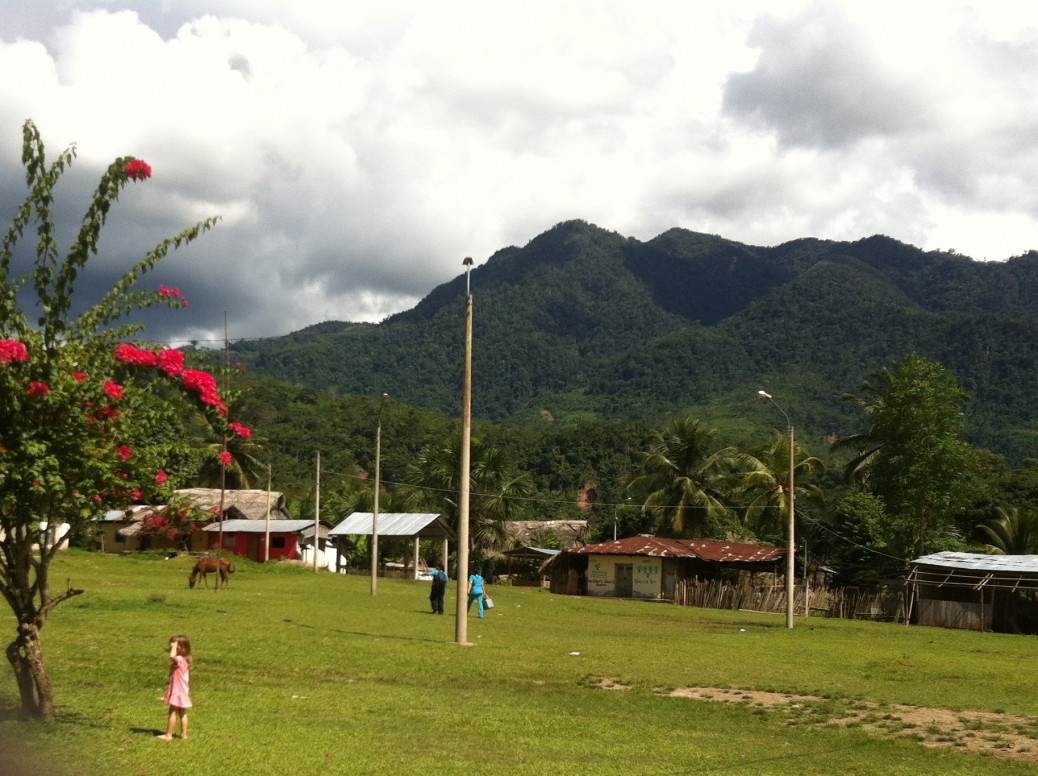 So it’s currently 2.36am on our second day here in the village and I have been wide awake for several hours already (owing to the unfortunate cocktail of jet lag and Maia falling out of bed at 11.45pm!), so here I am writing the second installment of this most interesting adventure… in the introductory piece yesterday I promised to share the whole truth – so this installment will present a report on the current state of village life which most certainly does that!

The fact is that, notwithstanding the breath-taking possibilities that the village of Aguano Muyuna presents as a prospect for a New Earth project, it was patently clear by the end of our first day that not all is well in paradise…

The people are very poor, most are inherently lazy and, despite a letter of invitation from a forward-thinking mayor, many appear somewhat reticent at the prospect of engaging with us to help themselves.

Crime is rampant – whilst ‘breaking and entering’ is not something that generally occurs, you cannot go out and leave a door unlocked (for even a few minutes) and expect not to be stolen from. Everyone knows who the thieves are, and if someone is stolen from the people will tell you who it is, but no one is willing to do anything about it. There are no police in the village – something I consider to be a positive thing – but neither the judge nor public officials are motivated or concerned with reprimanding thieves (or other criminals), and the people themselves lack (individually and collectively) the moral fortitude to address injustice where it arises.

The village is actually much cleaner than I expected, but that is only because the garbage gets piled up at the end of the street where it is periodically burnt (or rather what’s left of it is burnt after the rest has blown into the river). There is no separation of waste, not even organic waste – despite being a peoples who live off the land, the concept of composting is entirely alien.

The 700 or so inhabitants share four separate religious groups – most harbouring resentment, hatred or contempt for the members of the other groups. As a result, nothing gets done – the villagers can rarely achieve a majority decision (let alone consensus) on any matter of social importance because they are unwilling to ever agree with a member of another religious group no matter have wise or necessary their proposal may be.

The truth is that there are many parallels between the problems of the western world and the problems of the village… both are fundamentally born of disenfranchisement, dis-empowerment, unconscious multi-generational indoctrination, faulty belief structures, too much time spent thinking of oneself or one’s own interests at the expense of others and the whole – basically a general lack of conscience in sovereign expression.

And so, not 24 hours since landing here in the village, the path ahead is clear – it is the same path that we have necessarily chosen to walk with the New Earth Project as a whole – our efforts must first be focused on nurturing and empowering the people themselves to engage the truest of sovereign principles – clearing the pathways which afford the space to allow people to realise for themselves the wisdom of the still small voice of conscience and act upon that wisdom with courage and strength.

But life is not all bad here in the village – the people themselves are, in the main, a wonderful, happy and beautiful bunch… you don’t get the same open-hearted welcome and smiles that you get in many of the Asian and South Pacific nations (those which are commonly considered by the western world as having ‘nice people’)… what you get instead are more cautious and slightly guarded individuals who first want to get a sense of who you are before they open up. But once they do they are as decent, kind and generous as anyone you’re likely to meet.

There is no doctor in the village (something which we hope to rectify as soon as possible, so if you are a naturopathic doctor reading this and are inspired to answer the call, please get in touch with me). This unfortunate situation does however yield a rather beautiful sense of community solidarity – the people are quite knowledgeable of local medicines and are therefore quite capable of healing themselves, and they support each other in the process. And when someone gets really sick, the caring and compassionate nature of these invariably kind people really shines through – the women of the village descend en masse to the kitchen of their afflicted brother or sister, everyone contributes toward procuring the food – chickens and oranges mostly – and the women prepare a barbequed banquet which the entire village attends. The last such event was apparently only a couple of weeks ago… 18 women gathered in the kitchen of the ailing women (who was allegedly bright yellow from some unknown condition) to juice countless oranges and prepare 106 chickens (with marinade and various accoutrements) for the barbeque, all working together bringing love, joy and energy to the sick home. The following morning the mayor wakes the entire village at 4.30am on his megaphone and the oven is lit. Everyone pays as generously as they are able for their meal and all the proceeds go to the family of the ailed individual so that they can be taken to the local hospital for treatment. This is just one example of the remarkably kind and compassionate nature of these most humble of people.

The fact is that this is a place of massive contradictions – only time will tell whether Aguano Muyuna is the right place to host a New Earth ‘International Community’ and venue (although it looks well suited bar a few hurdles to first overcome), but one thing is crystal clear – this magical place (and its delightful yet struggling peoples) is a prospect that we cannot walk away from. A more daunting (yet inspiring) challenge I have never faced; a greater opportunity I have never witnessed – whatever form our participation may end up taking, it looks like we are here to stay…

There are no users currently online

Be sure to browse communities and groups before creating a new one, maybe your idea or location already has an existing network you can join!